World Economy Unbalanced: What will Crash Next?

Today, I talked to a young woman who was convinced Real Estate was the secret to untold riches.  She told me that the market was appreciating rapidly so she was becoming an agent.  I smiled, and left her to her dreams.  Later, I reflected on other people who told me similar things.  Right before the Real Estate crash in 2007, several of my acquaintances told me they were becoming mortgage loan officers, bulk mortgage securities traunchers, or even real estate agents.  All of them were attracted to the perceived easy money in the field.  Some of them were very unlikely candidates to occupy white collar job titles.  One was a hot water heater installer, another operated a print shop, and some were indigent.  Reminds me of Joe Kennedy's shoe shiner.

The conversation with the young woman brought back those memories from a decade ago.   Like the other acquaintances, she was an unlikely candidate. The last I knew she was going to Graduate school, yet today she showed up married and on the trail of easy riches in Real Estate.  The Real Estate market in Portland OR has boomed back compared to the dark days of 2009.  People are moving to Portland, so they will drive the price of housing up.  However, this conversation showed an overall weakness in the economy.  I perceive a bubble in Real Estate because unlikely people are flocking to the industry.

Wholesale Prices Decline in US for 4 Months

Tech Stock Bubble (Whenever someone says no bubble, there really is)

Mike Bird from Business Insider has an interesting theory.  He thinks a strong dollar is leading to some kind of financial market crash.  And his rating of strong dollar really means incredibly strong dollar.  He has a chart that shows a strong US Dollar related to major events. 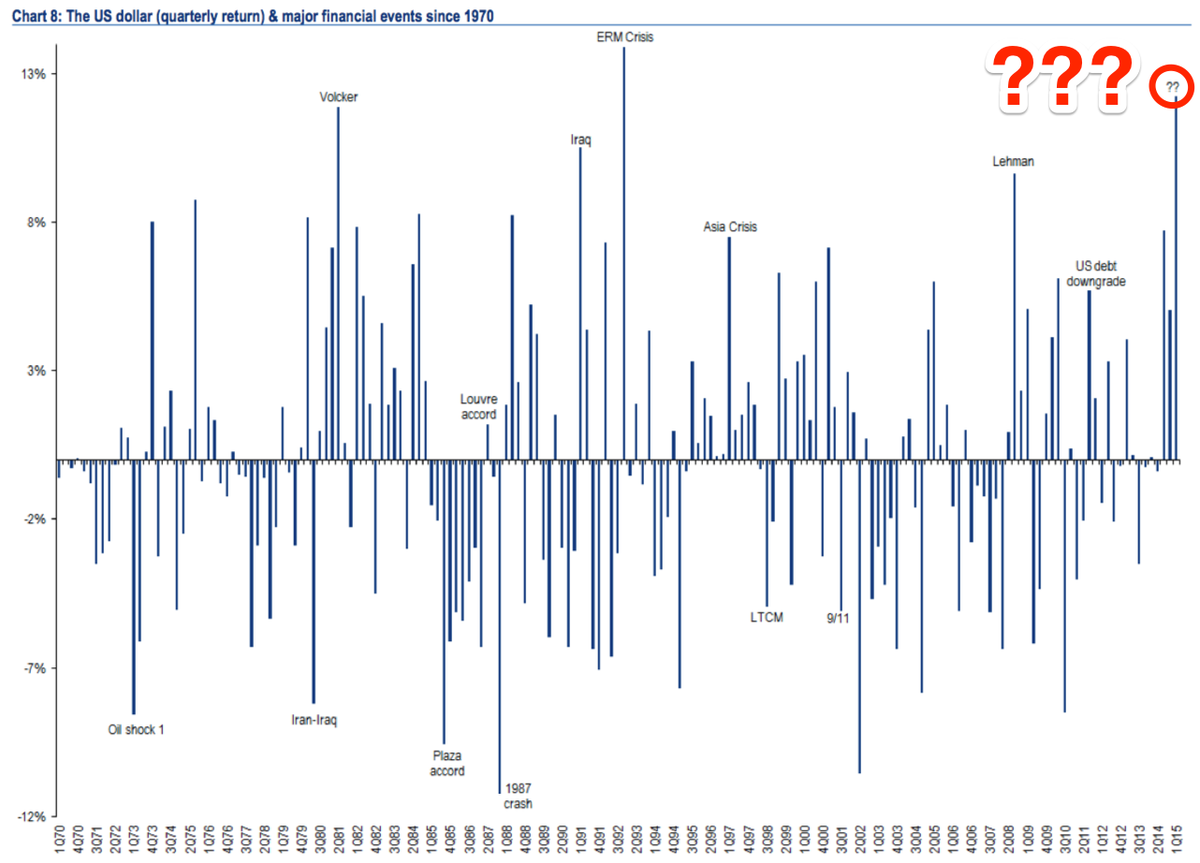 The strong dollar prior to Lehman Brothers being allowed to fail was weaker than today's dollar.  The failure of Lehman Brothers led to the mortgage melt down.  Mike Bird's theory has merit, but not entirely for the reason of his chart.

Part of the Kondratiev and the end of a Kuznets cycle is the prediction of deflating prices.  Perhaps the Keynesian interventions in the US and foreign economies held deflation at bay, and today's strong dollar is a symptom of delayed problems.

We are at a perfect alignment of several forces, as seen by the links to various pieces of the economy that are showing weaknesses.  In any event, several possibilities exist:
Under any analysis or scenario, there are too many places where the macro economy is going wrong.  Once we get past the merge point of all these crises, we will know and understand why the dollar is so strong today.  We are definitely in uncharted waters, and caution should be the watch word of the day.