As I write this post, I'm reflecting on what I see as yet another Wind of Change: 3D printing.  Bear with me a little while, I'm seeing this as part of several trends that started in the 90s.

First There was Music

35 years ago I went to college.  Several people I knew used a cassette tape to capture an LP vinyl record.  Everyone knew the cassette tape was the end of the process, because cassettes sounded fuzzy when copied from other cassettes.  Some of the cassettes from that era lasted 25+ years if they were good quality.  Since the cassettes were the end point of the music, most copying went no further.  An average record usually would have under 5 copies made, sometimes just to play in the car by the primary owner.

Once we add technology to the mix, more copies were the norm.  Napster started, and people were able to share music.  Other services in the same general time period were Morpheus, Gnutella, Kazaa, etc.  Using the computer and the Internet, people were able to share one CD millions of times, and every copy was the same.  Even the record companies took notice.  The assault on Intellectual property resulted in record company prosecution of selected individuals.

The record company prosecutions (RIAA) resulted in consumer dissatisfaction with the companies.  However, they did not stop with consumers, they went after businesses too.  In the early 2000s, for the first time ever, music companies such as SESAC, ASCAP, and BMI came by businesses that played music to their customers and demanded contract payments under threat of legal action.

One of the ironies of all this enforcement was the complaints from the artists of not getting very much money for their works.  The musician complaints crescendo with the introduction of Spotify and Rhapsody which they say don't pay the artist much at all. Additionally, complaining gets musicians banned.

The net effect of the hostilities resulted in the slow death of the music industry since the 90's.  However, people are consuming music differently now, including ringtones.  All in all, the decline is leveling out, but the damage still seems to be done. Image from Music Business Research and originally from RIAA.org

Movies went through similar problems, but they used different techniques to battle the IP Piracy.  Movies went to an early release schedule for DVDs from the theaters, and studios even included regular DVDs with BluRay DVDs.  The MPAA sued several people for piracy and general bitterness against the movie studios came to a head with the SONY studios hack.  Whether North Korea is behind it or not, someone is pretty upset at them.  Still, I'd say people are less upset with the movie studios than the music industry, but you would expect that since the movies took a less combative approach to the problem of piracy. Just like music, people are choosing to enjoy movies in different formats.  If you add both lines, like 2013 with 5.2 DVDs and 3.2 Streams, you get 8.4, pretty much the same amount as 2010, therefore the market is flat lined. 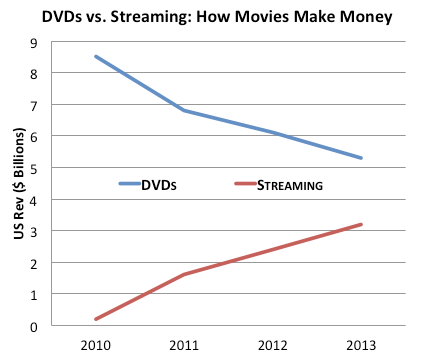 Chart from The Atlantic


And Then Came Books

eBooks are the rage for the past few years.  In theory, they are cheaper, and easier on the environment.  Major problems with eBooks is consumers do not own them, they simply own the right to read them.  Forget about leaving your book collection to your descendants, or selling them when you come on hard times.  And sometimes they can disappear from you electronic reading device in the middle of the night.  I don't hear much about eBook piracy, but it exists.  Just like Rhapsody and Spotify, authors complain they don't get enough royalties when they rent a book on Scribd, Oyster or the All you can read Kindle service. On the bright side for authors is the very real probability they can self publish and make decent money.

Books, Music and Movies are all traditional business models changed radically by technological change.  They all seemed to go through similar stages with varying degrees of success, but in the end the old business model was dead.  I think 3-D printers are in an infancy stage that will result in fundamental change in supply chain management.  Here are a few factors that will make a great change in 3-D printing:
Future printers will make finished goods in metal.  This is significant because in the past, very few people would make metal objects at home.  3D printers could change all this.  Just think about people making metal guns at home, especially after all the hoopla about the plastic gun made by the plastic 3-D printers.

The Military  will be able to side step the expensive supply chain insisted on by defense contractors.  When they deploy to remote corners of the world, they simply bring printers and raw materials.  When they need a plane part, they down load the file and wait while the printer makes the item.  The Royal Air Force has already put a printed item on one of their aircraft.

The printers are becoming cheaper.  Amazon has some for $500 that have fairly decent ratings.  At this point, no one really needs one at home, but as prices fall, they will be easier to use and purchase.  At this point the inexpensive printers will make plastic pieces that might cost a lot if purchased from a store.  Plates, bottles, storage drawers, appliance parts, car parts,  the possibilities are endless.

The problem with all of these technologies is established businesses trying to apply old fashioned business models to a new process.  Suing people, and limiting how people can get the product, never seems to work.  Somehow the product still slips out.  Books, music and movies all used to be physical products, but they have all changed over to digital delivery.  Solid objects are the next item to make the metamorphosis to pure digital form.  This is more likely to create change and problems than the previous transitions in books, music and movies.  Cory Doctorow, in his novel "Makers", had some idea of all the trouble this transition will make.  The last couple of posts are about labor surplus.  3-D printers are likely to create even more problems during their adoption because people will be easily able to copy solid objects, and side step traditional supply chains that include factories, warehouses and thousands of workers.  .

And in the copying lies a secondary problem.  Who will be motivated to create if they won't be paid?