Today, I feel like I missed an important point to buying electronics for more than 30 years.  I always had to buy a new computer every three years.  Sometimes I would build one.  I remember when I was in my mid teens and had to have that LED watch that was all the rage in the late 70's.  I also had to buy the Bowmar Scienrific calculator (that one I needed in Engineering School) and the TI programmable calculator later in the early 80s.  Most of these had uses, and at the time, the difference between generations of electronic gear was sizeable.

The difference in gear between generations led me down the computer trail in the mid nineties.  I bought a PC with a 486 processor, but I had to get the one with the math coprocessor and the 159 Mb hard drive with 2 Mb memory.  As time went by, I upgraded through the generations until I stopped with the Core2Quad computer.

I have to admit that I made a lot of money from computers.  In my job in the early 90s, I had to invoice customers each month, and this process took 3+ days when I first got there.  I wrote a database in primitive Access, and suddenly we had a scheduling tool and billing took about 10 minutes.  I ran a Hockey League using accounting software and tracked people through Access to ensure effective marketing.  Still, though, I tended to buy a lot of gear.

My first inkling (that I ignored) was when we brought in an inventory system to track merchandise in the Pro Shop.  We purchased a used system using a 286 CPU and DOS.  At the time, we had Windows 3.11, and used 486s.  The ancient 286 system did just fine tracking inventory and acting as a POS (Point of Sale).


Later, around 1997, I moved to Oregon.  I left behind my Windows 3.11 books because I was certain the new company I was working for would use Windows 95.  When I got to work in Oregon, the company used Windows 3.11 on 5+ year old computers.  I still didn't understand the difference between a computer system to get the job done and a system that was advanced.  The 5+ year old computers did the job just fine.  In 1998 or so, the company put in computerized POS computers.  These were good and had a whopping 64 Mb hard drive to run the simplified GUI (Graphical User Interface).  One day one of them blew the hard drive, and the technician had that hardest time finding one small enough.  Even though our computers were good enough, getting parts was difficult once the generations of electronics moved forward.


Over the past twenty years, Wink's Hardware , has used an intriguing system of pads to ring up customers who have accounts.  These pads look like Apple Newtons (although they are not). 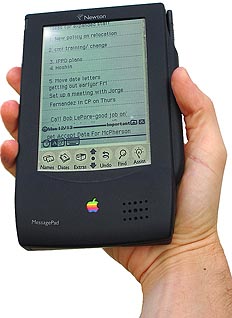 One day I noticed how old the system is, and I asked one of the clerks about it.  He said they bought another store's system for parts to keep their system going.  As a result they did not have ongoing technology costs to bear.  I thought this was a smart idea.


Apparently, the good enough POS system at work wasn't good enough by 1999.  The company put in DSL lines and fancy computers (for the time) that ran integrated custom software for our industry.  I was relieved.  Finally, the company understood the need for keeping up with the latest and greatest hardware.  They did make one mistake (in my book), they put in a regular computer in each location as a server rather than an actual server.  This made the system work slowly.   Additionally the DSL worked only through a VPN (Virtual Private Network), so the home office could keep an eye on us.  These two problems made the system work very slowly.  As we used the system, too much user detail further bogged down operations.  After a few years, the system got very slow.  All these computers cost the company I worked for, in my estimation, over $500,000.  Unsurprisingly, the company went out of business in early 2002.  Once we started working for a new company, the makers of the software wanted to be paid more money to keep the system going.  We decided not to, and put in an old school TEC cash register system for a fraction of the cost.  The TEC registers worked, and they were good enough for what we do.

Today, the generations of computers have very little difference in operating performance.  (Tablets are a different beast, not addressed in this article)  The major difference in the generations lately is in lower power consumption, integrated graphics, and in the case of Intel computers greater numbers of threads that simulate cores.  This means if a person is willing to carry a slightly heavier lap top, he or she can be assured of enough power to get most jobs done.  Desktops literally don't matter when they were produced, so long as a person doesn't want to run the latest and greatest games.  (There are a lot of video editing open source programs that work on a variety of hardware)  I sold a T61P Lenovo Thinkpad to a man who loves to play older games.  He is ecstatic with the performance. Thinkpads are built like tanks and that computer still gives him pleasure even though its' production date is 2008 or 9 and we are in 2014 now.


I am chuckling because LifeHacker just came out with a good article on electronic gear that is good enough.  Even Jeff Bezos, from Amazon, talks about the "upgrade treadmill."  Obviously, his company makes money from content, not hardware, so his comments are biased.  Even biased comments like these have a kernel of truth.

Like many men, I projected my personality into the tools I used in my work, especially tools that also could be used for entertainment like computers.  Electronic gear somehow defined who I was, even though today this feels like an unhealthy frame of mind.  I got a lot of ego boost from what my stuff could do that other people's gear could not.  I've moved beyond this, and today I try hard to look at my electronics as tools.

When you look at electronic gear as tools, getting off the upgrade cycle is easy.  If a power saw works, then there is no need to buy the newer model.  Content is the king and the reason why we have electronics.  Electronics enable us to perform work, enjoy entertainment, or share our projects with others.  Remembering this can be difficult for me, because I always like the latest and greatest.  Buying items that get the job done always trumps having to learn new systems on new gear.